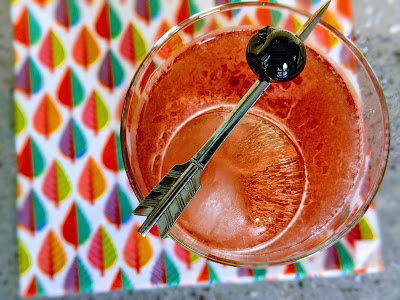 This recipe is from my very first bar gig, the spot where I learned to sling drinks. Picture this: the year was 2007. The groundbreaking series The L Word was in full swing. The Cosmo was *the* most popular cocktail called for off menu.  Vodka Red Bull flowed through the veins of many a patron. Grey Goose everything. Cold cases of Labatt's Blue and Michelob Ultra were always in supply. I drank a LOT of Jameson. An obscene amount of it. It was...a simpler time.

Fast forward to our dystopian future, and some things have not changed. The L Word is back (wut even!), people still drink Red Bull and vodka for some reason, and the Countrypolitan is still a damn fine cocktail. Felicia's Atomic Lounge in Ithaca, NY, sadly no longer exists; the bar has since retired, but the memory of Felicia lives on. One of the most popular drinks on the house menu while I was worked there? The Countrypolitan. As you may have already guessed, this is just a riff on the much maligned Cosmo, subbing in bourbon for the vodka and serving it on the rocks. The result is that you've got a tasty little whiskey punch in front of you. This version of the recipe is on the tart side, with a touch more bourbon the original. For a blast from the past, check this out!

Shake all ingredients in a shaker with ice, strain into a double rocks glass (aka bucket) onto fresh ice or one big cube if that's your jam. Garnish with a cherry.

*(not the Ocean spray cocktail stuff, it's too sweet -- but if that's all you have, increase your lime juice to balance) 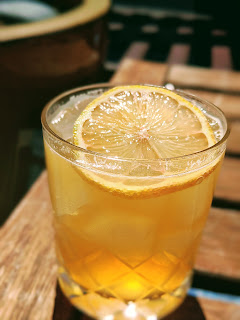